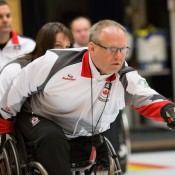 Dennis Thiessen is a three-time national champion, world champion, and Paralympic gold medallist in wheelchair curling. Dennis started in his sport in 2005 when a friend invited him to try wheelchair curling. At the time, Dennis was familiar with curling for able-bodied athletes, but couldn’t see how someone could throw a rock down the ice while in a wheelchair. Today he is one of the top wheelchair curlers in the country.

Outside of curling, Dennis helped establish the provincial branch of Manitoba Farmers with Disabilities, an organization dedicated to presenting farm safety programs to children, youth and adults. He lost his leg in an accident on his family’s farm when he was seventeen years old.