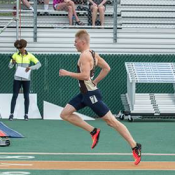 After graduating high school in 2014, Evan clinched double gold in the 100-metre and 200-metre at Nationals, and began his first year at the University of Manitoba that same fall. During his first few months at U of M, coach Alex Gardiner recruited him to the Bison track team. In 2015 Evan had the opportunity to compete at the 2015 Pan Am Junior Championships, an event he says was the most memorable of his career so far.

Today, Ratzlaff continues to make huge strides in his athletic career with the Bisons. While track isn’t a team sport, Evan says he’s met many amazing people through his sport.