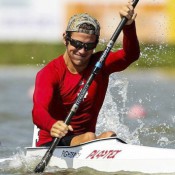 James Lavallée’s journey through sport started at age 11, when he began kayaking. His love of water and being outside made the sport a natural fit. Today, James competes at the Junior National Level.

One of his most memorable moments in sport includes his first Junior World Championships in 2014. “From the moment I stepped off the bus I could feel the energy, aggression and drive of these top athletes (many who were older than me.)” His first real exposure to high performance sport, this event was motivational for him, seeing the way these athletes worked on the water.

I often think back to that day when the training gets tough. It reminds me of what it’s going to take to get to the next level and beyond.

Among his other most memorable moments is his first big win – a U16 k1 200m at the National Championships in 2013.

At the 2017 Canada Games, James won one silver and two bronze medals in Men’s kayaking for Team Manitoba. In 2017, Lavallée was awarded the Tom Longboat Award and was named one of CBC’s Future 40 nominees for his outstanding year.

James says that he is a product not just of his parents, but the many amazing people who have shaped him into the person he is today: “None of what I have done or will do is possible without them.” James ultimate goal in sport is to compete in Tokyo for the 2020 Summer Olympics.

Favourite thing about living in Manitoba: The outdoors, the people and the culture.