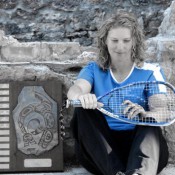 Jennifer Saunders began her career in sport at age 10, when she attended a “Learn to Play” racquetball clinic, advertised by the Thompson Citizen. Jennifer went from playing for fun, to joining the junior program.

Since then, Jennifer has gone on to win eight National Singles Titles and breaking the record for National Titles by a female, after being down 6-2 and 9-8 in a tie-breaker. She has also brought home five World Championship medals, including two silver medals in 2002 and 2012.

The speed and aggressiveness of this individual sport may be what Jennifer loves most about racquetball, but she also knows how to slow things down in her down-time, and enjoys playing golf (she’s had two hole-in-ones, to date.)

Her dream: To meet Wayne Gretzky and become best friends, of course.