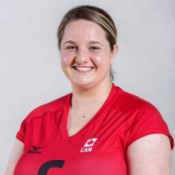 Leanne Muldrew returns to the women’s national sitting volleyball team for the 2016 Paralympic Games in Rio. Muldrew played for Canada in 2011 and was on the squad that placed third at the Paralympic Games qualifier for the London 2012 Paralympic Games. Canada needed a top-two to advance to those Games.

Since then, Muldrew, a former standout standup player in Winnipeg’s club system, has focused on her studies and her career as an American Sign Language interpreter.

Leanne Muldrew and Canada’s sitting volleyball team played at their first ever Paralympic Games in Rio. After a winless week of competition, the team finished on a high note, winning the classification game 3-0 against Rwanda. Canada finished in seventh place overall.