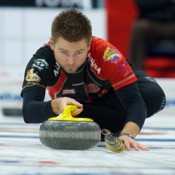 Born in Brandon and raised in Winnipeg, skip Mike McEwen began curling quite young. In 1998, he and his team won their first Junior Provincial Championship, and ended up placing second nationally, a fate they repeated in 2001.

The current Team McEwen formed in 2007, playing in provincial and national competitions against some of Canada’s best. Things steadily progressed for the team; they won large competitions such as The Masters of Curling and The Canadian Open beginning in their third season as a foursome. In 2014, Mike travelled with wife Dawn McEwen (lead of team Jennifer Jones) to the Sochi Olympics Team, and observed the gold-medal calibre support system and around the team, which helped them to refocus and plan after a few tough Provincial Championship losses.

Team McEwen recently qualified for their first Brier in 2016, after winning the Men’s Viterra Championship in Selkirk, MB. They continue to be one of the top male curling teams in the country.

Eight Ends: McEwen, Koe charge out of the gate at Brier

SPORTSNET (Mar 6) The Tim Hortons Brier is now in full swing with Manitoba’s Mike McEwen and Team Canada’s Kevin Koe jumping to the top of the leaderboard with 3-0 starts in St. John’s, N.L.

GLOBAL NEWS (Feb 12) A month ago they were contemplating breaking up the band but now they’re back to back provincial champs.

WINNIPEG SUN (Feb 8) It seemed like every February – Mike McEwen was asked the same question. Is this the year your team breaks through and finally wins the Provincial Men’s Curling Championship?

SPORTSNET (Jan 23) While the tour is cooling down for a bit, provincial playdowns are heating up in Canada. A number of regions will crown their women’s champions this weekend…