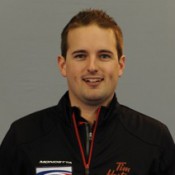 After playing four years of hockey, Reid Carruthers began curling at age 14, following in the footsteps of his parents who were also curlers. He quickly came to love the sport – especially the competition and camaraderie. “It is really competitive on the ice, but off the ice most curlers are good friends.”

His biggest accomplishment and favourite event to date was winning the 2011 World Curling Championships as part of Team Canada in Regina.

“It was an amazing feeling to be Team Canada on home soil.”

Reid studied Kinesiology and Industrial Arts at the University of Winnipeg, and works as a school teacher.

While he might appear quiet and stoic on the ice, off the ice “Reidarama” is quite chatty and outgoing. He’s also a big fan of summer sports, and says he would love to one day watch a Summer Olympic Games live in person.

One athlete he admires is Michael Jordan. “He was amazing to watch in his day. His work ethic was unmatched. He seemed to give 100% in every game.”

Reid skips Team Carruthers, who are currently ranked first on the CTRS. They recently earned a berth in the 2017 Olympic Trials, which will take place in December 2017.

Favourite quote: “Shoot for the moon. Even if you miss you will land among the stars.”