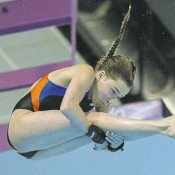 Serena Clare Leipsic Buchwald came into diving at age 11. The Winnipeg-born athlete had just quit gymnastics and was looking for a sport that involved flipping. In her second year of diving, Serena had a brush with some of the best divers around when Winnipeg played host to the Senior Nationals competition, allowing her to dive with and watch these athletes compete.

In 2016, Serena competed in the Senior Nationals, qualifying for finals in the three-metre event and earning herself a spot at Olympic Trials. In 2017, Serena was named to Team Manitoba for the 2017 Canada Games. Though talented in each of diving’s three events, Serena shines on the 10-metre platform. Coach Dallas Ludwick says, “The difficulty and quality of Serena’s skills on the 10-metre will give her an edge in terms of qualifying for the NCAA National Championships”

Serena will compete for Revolution Diving for one last season as a junior athlete before moving to Pittsburgh, Pennsylvania, where she will join the University of Pittsburgh Panthers (Division I) diving team under the guidance of diving head coach Kate Hazelton.

An outstanding academic, Serena will graduate from Balmoral Hall School next spring and will pursue a degree in neuroscience upon starting at the University of Pittsburgh in 2018.

Serena’s goal in diving is “to go as far as possible, for as long as possible.”

Family in sport: Serena’s mom is a National Champion Speed Skater, and her twin sister is in the professional division at a ballet school.