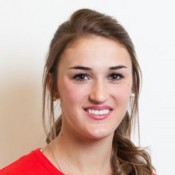 Coming from a family of three former National Team volleyball players, Taylor Pischke grew up playing volleyball at her family’s cabin at Grand Beach. Taylor formally began playing volleyball in high school, and headed south to play indoor volleyball at the University of California, Santa Barbara (UCSB). After one term, however, Taylor came back to Manitoba, as she felt her beach volleyball opportunities were more plentiful at home.

In 2012, Taylor and Melissa Humana-Paredes formed a duo, and moved quickly up the nation’s rungs to become to top Canadian Beach Volleyball duo by 2014. The two formed a team when Taylor’s father, two-time Olympian Garth Pischke, and Melissa’s father, widely-known indoor volleyball coach Hernán Humaña, spoke about getting their girls together to play. The two clicked, and since 2014 have dominated competitions not just in Canada but across the globe. Taylor says the most memorable moment of her career so far was winning Bronze at the U23 World Championships in Poland, and in summer 2015 she and Melissa placed in the top 10 at the Senior World Championships. Taylor and Mel narrowly missed the podium at the 2015 Pan Am Games, but enjoyed being able to play on home soil nonetheless. They are now focused on achieving their goal of qualifying for the Rio de Janeiro Olympics in summer 2016.

Outside volleyball, Taylor is currently finishing her degree in science at the University of Manitoba, and hopes to move into medicine in the future. Also on her bucket list? Opening a bakery.

“Although he doesn’t play my sport, he has all the qualities I hope to possess. He is composed, competitive and respectful, while also being exceptionally talented.”