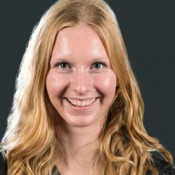 Tegan Turner didn’t begin running competitively until she was already in high school, and even then she didn’t intend it to be a serious sport – she wanted to be involved in a school sport to spend more time with friends. Tegan’s athleticism and natural ability, along with serious training, resulted in her transitioning from a competitive artistic gymnast to becoming one of the fastest female sprinters in the province. In 2014, Athletics Manitoba named her both Female Sprinter of the Year and Female Junior Athlete of the Year.

In 2015, Tegan attended the Western Canada Summer Games, where she brought home three gold medals, winning the 100 metre, 200 metre and 4×100 relay. Her relay team not only won gold but also broke a 35-year-old record in the process, a feat of which she her team are incredibly proud. Later in 2015, Tegan attended the Canadian Junior Track and Field Championships, where where she won a bronze medal in the 200 metre.

Tegan is now in her second year at the University of Manitoba, where she excels in short-distance sprints and stands on the podium at most of her meets. Tegan is ranked third nationally in the 60 metre event, and she hopes to continue challenging herself to push her own limits in the future.

She embodies all aspects of an exceptional athlete, leader and person.