A Paralympian’s journey from sport to life beyond sport

Today we observe Bell Let’s Talk Day. For me, this day represents our efforts as a society to destigmatize mental illness and to accept those with lived experience as a whole. In other words, we are attempting to take away the fears and preconceived notions we have both as people with lived experience and those among us who fear what we do not understand.

Over the past several weeks, you may have seen several posts from me on the Paralympic Alumni page about a project I am creating in conjunction with the Canadian Sport Centre Manitoba that we are calling Beyond the Glory. This project aims to assist Paralympians as they transition from lives centred around active competition to life outside sport. 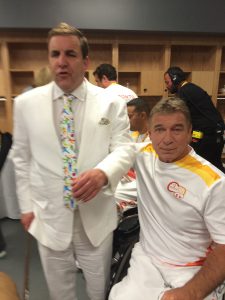 As a former Paralympian myself, I remember wondering what retirement would be like. As much as I cringed getting up in the morning for practice on cold Winnipeg Winter mornings, there was never a time when I could not imagine swimming anymore. I could not think about what life would be like without sport and did not want to think about it either.

I worried about what I would lose: the admiration and respect of friends, family and the wider community. The ability to travel to places to which I may never have gone otherwise; the relationships I had built up over the years with people I might not see for months, but once we were together it was if we never were apart.

I felt lucky because I was able to go to school while training. I became involved in a relationship which resulted in a marriage that gave me a son of whom I am incredibly proud. I even managed to begin a working career while I was still actively competing. I thought my life was pretty normal and that I wouldn’t have any trouble adjusting to life outside sport.

When I retired, I experienced many negative thoughts, feelings and emotions. I felt like everything I did had to be perfect. I experienced failures in my working career which I took very personally since failure was—quite fortunately for me I guess—not something I had to undergo with very much regularity as an athlete.

As a result, I think I lived for many years with anxiety and depression which, in addition to not being diagnosed, was unbeknownst to me.

It took me several years and something of an ongoing journey through therapy, but I think I can say that while they never go away, I can control these thoughts and feelings most of the time.

As I look back on my career outside sport which has now spanned several years, I don’t think I have had the same success as a working person that I believe I experienced as an athlete – this proved to be something of a surprise to me. I anticipated that my reputation as an athlete, my intelligence and my ability to focus on education and work the same way I had concentrated on swimming would enable me to experience the same success in my professional career that I had in the pool.

As I look back now, I realize just how unprepared for retirement I was and how the limitations of my disability compounded and exacerbated some of the challenges and struggles I had to go through. I wished there had been a place to go where I could have learned both from and with others who were in the same place in their lives like myself.

I am creating Beyond the Glory as a response to what I feel I have gone through so that hopefully this transition might be even just a little bit easier for others than I believe it was for me. In doing so, I hope to honour the efforts and sacrifices made by others on my behalf and in my interests, which allowed me to experience high performance competition to the extent I did, to reap its rewards and celebrate its successes, and to have the personal and professional life I have had since I retired.

Please consider being a volunteer participant in Beyond the Glory. It will only take an hour or two of your time for eight weeks. And if nothing else you will be assisting me and the Canadian Sport Centre Manitoba to determine whether what I have written about here rings true for others as well and if so, what might we do to assist our future Paralympians when the time comes for them to move on to the next stages of there lives.