The Cal Botterill Lecture will return in 2022. Stay tuned for updates.

Uncompromising: An exploration of grit, passion, leadership, and humanity in elite sport        My story, my way, my dream.

Join us for an inspiring conversation with three elite athletes who are unwavering in their pursuit of excellence, having the courage to be themselves by living their values and giving back.  Each of them couples who they are with the power of sport to make our world a better place.

Join us on Wednesday, November 17th 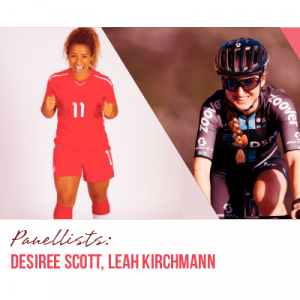 2-time Olympic cyclist. Kirchmann has been a professional athlete for many years out of Netherlands, currently racing for Team DSM, the top female cycling team in the world.

Professional basketball player with the Esperides Basketball Club in Greece. Fun fact, Potter was the first Manitoban drafted to WNBA.

About The Cal Botterill Legacy Lecture

The Cal Botterill Lecture is an annual event where we bring in a speaker to inspire and strengthen our community. The aim is for the person to share their wisdom and experience, and also to allow us an opportunity to continue to grow as a sport community.

The lecture series was established in 2007 by Director of Sport Psychology at the Canadian Sport Centre Manitoba, Dr. Adrienne Leslie-Toogood, the year Dr. Cal Botterill retired from teaching at the University of Winnipeg. Throughout his career, Dr. Botterill brought professionals to share knowledge with the sport community throughout Manitoba. The annual lecture series began in order to honour and continue his tradition.

The afternoon includes the presentation of the Jim Henderson dedicated service award in health and performance psychology, presented to a professional with a distinguished history of service provision.

Cal Botterill is part of an active family. His wife, Doreen (a two-time Olympian Speed skater) is a former elementary school physical education teacher at Brock Corydon School in Winnipeg. Their daughter Jennifer (a graduate of Harvard University) is a three-time gold and silver Olympic medallist, a five-time World Champion and NCAA Champion in hockey. Their son Jason (an MBA graduate of The University of Michigan) is a three-time World Junior Champion, an NCAA Champion and the current General Manager for the Buffalo Sabres.

Striving to develop and maintain perspective played a huge role as the family grew up in Wildwood Park (Winnipeg, MB), traveled and explored the world’s opportunities. Cal has been part of Canadian Teams at eight different Olympic Games and has consulted for five NHL teams (including the 1994 Stanley Cup Champion New York Rangers). Cal has received teaching excellence awards at both the University of Winnipeg and the University of Calgary.

Cal has enjoyed opportunities to contribute to medicine, business, health, education, emergency professions, performing arts and the media. He has championed interactive learning via technology and maintained a strong interest in global and personal issues. As the author of hundreds of articles, books, videos and presentations, Cal has helped popularize health and performance psychology. Nature, family and professional colleagues play a huge role in his perspective.

The delivery of sport psychology services in the Province of Manitoba has a distinguished history of professionals. In order to begin to honour this legacy, and to recognize the invaluable contributions of the service providers, CSCM and SportPsych Manitoba have collaborated to present an annual dedicated service award in honour of Mr. Jim Henderson.

A call for nominations will be sent out each year. Nominations for 2021 will be due next fall. The recipient will be notified of the selection and recognized for their accomplishment at the annual Cal Botterill Legacy lecture. Download the nomination form.

A committee including Mr. Jim Henderson, Dr. Adrienne Leslie-Toogood, Dr. Cal Botterill, the past award winner and one ad hoc member will select the recipient of the Dedicated Service Award.

The recipient will receive a small token of appreciation, and their name will be engraved on a large plaque that will be on display in the CSCM resource library.

The recipient will also be asked to contribute an applied piece for distribution in the Sport Psychology Manitoba newsletter and the CSCM website. This information will also be forwarded to coaches and athletes via listserv and/or email. This piece will be created in collaboration with the selection committee and is meant to provide applied information to the athletes and coaches in the province of Manitoba.