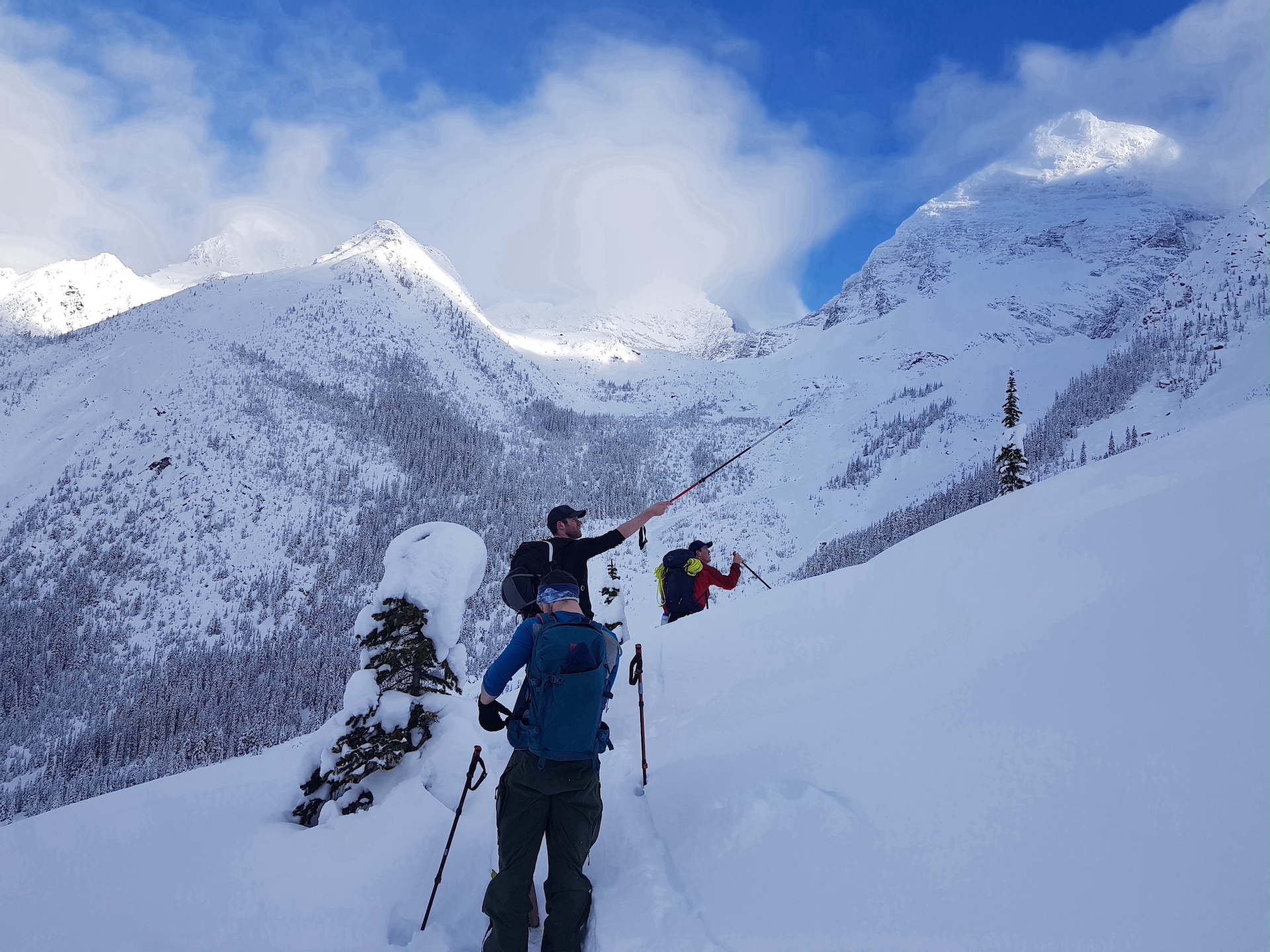 Three months and one day after my last surgery, I returned to work as a wildfire fighter. This was my goal from the first day in the hospital, but the practicality of that goal changed continually throughout my recovery. I had surgeons say it was achievable, physiotherapists who said there was a zero percent chance of returning this wildfire season, and so many friends who wanted to be supportive and see me set realistic and safe goals, who weren’t sure what to say.

On January 25th, 2020, I was backcountry skiing with three friends when I caught in an avalanche at Roger’s Pass, B.C. Two of us were caught in the slide while the other two were physically safe, but stuck seeing the two of us fighting to stay alive.

I was beginning my descent when the slide occurred, and experienced the scariest moments of my life; getting tossed around inside a wave of snow, unable to breathe, picked up and slammed down again and again, just waiting to be knocked out and never wake up again. 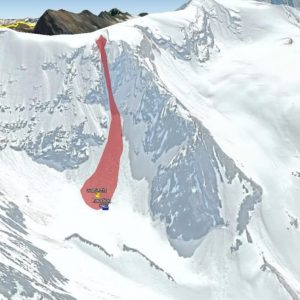 As the slide came to a stop, I was still conscious and found myself largely unburied by the snow. I was about 700 meters below where I had started my descent (in elevation), but I was alive. I could see my friend who had been the first to descend, he was also partially buried but alive and able to talk. I could not believe we were both alive, conscious, and visible above the snow. He said he wasn’t able to dig himself out so once I had freed myself, I took a step towards him and my legs gave out. That’s when I knew I wasn’t coming out of this unscathed.

We were able to make it out of the backcountry with the help of the other two who were with us, the Parks Canada Emergency Response Crew and a ballsy helicopter pilot. At least one life was saved by the quick response and decision making from that group, and I will be thankful for them for as long as I live. 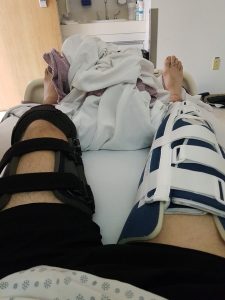 I was diagnosed with a tibial plateau fracture in my right leg that evening at a hospital in Revelstoke, B.C. They suspected some ligament damage on my left side but there was too much swelling to assess properly and I was sent back to Alberta to get surgery. At the university hospital in Edmonton, I was on call for surgery for three straight days until I was brought down to the operating room.

Like me, the surgeon who performed the operation was a former speed skater himself. Despite the speed skating community being small and tight knit, we hadn’t met, but the connection through sport made me confident I’d be well taken care of. The doctor had me in and out of the operating room in no time, and the recovery on my right leg was underway. After the first surgery, I received an MRI to reveal the ligaments in my left knee would require surgery as well; my ACL, MCL and meniscus would need extensive repair. My second surgery occurred on February 3rd, 2020, and I was now ready to start my recovery on both sides.

When setbacks like injuries occur in sport, there is no time for self-pity. Athletes are always racing; first to the end of the rink, first to the finish line, first to recover. Any time wasted on self-pity is like hearing the starting gun go off and waiting until you’re ready.

The clock was ticking and I wasn’t wasting a moment.

Rehab at first was slow, simple exercises; trying to squeeze my quad, or flex my toes, or do ankle circles to keep the blood moving and reduce the risk of blood clots. The first day that I was lifted up to try and stand on my left leg, I had to be supported in place with a machine, and brace my forearms against it while putting the smallest amount of weight on my left leg as possible. I held that position for about 90 seconds before needing to be placed back in bed, and I felt like I’d just raced a 1500m. My heart was pounding, my head was swimming and I was struggling to catch my breath. At this point I felt the clock was ticking way too fast for me to reach the finish line in time, but I’d taken the first steps.

Over the next 6 weeks I progressed from “walking” with a machine that took almost all the weight off my legs, to a regular walker and eventually crutches. I was spending about two hours a day on my physiotherapy exercises and felt like things were healing the way they were supposed to. I was slowly gaining strength and flexibility on my left while keeping all weight off my right leg.

When the pandemic was declared in early March, I was back living at home and had just started returning to school. Although I had more time for my rehab without crutching to and from school, it also meant that doctor and physiotherapist appointments had to go virtual. This was another huge advantage of my athlete background.

Sport gives you excellent body awareness, and I was able to describe where I was limited, what hurt, and what was weak, at least well enough to come up with rehab exercises to keep me progressing.

My long career in sport also had times when I lost my funding and access to the team’s physiotherapists, so I was used to self-care. I felt I was familiar enough with the movements and exercises to not require the physiotherapist there in person to show me how each movement should be done. As helpful as it would have been to be able to see them in person, the reality was it wasn’t practical at the time, so I accepted that and adapted.

By the start of April, I was walking short distances without a noticeable limp. I was weak and my fitness had plummeted, but I was able to up my rehab to try and get strong enough to safely return to work for the start of May. This was a tough balancing act. I wanted to push myself but I didn’t have time to lose over setbacks from overuse. I managed it fairly well, and with one week before I was set to report for work, the physiotherapist who had said there was a zero percent chance of making it back this season, cleared me to give it a try. 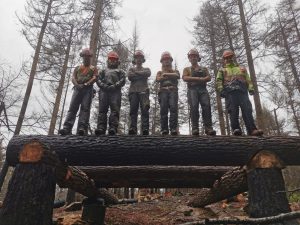 As much as I wanted to get back to work, I couldn’t risk my own safety or anyone else’s on my crew if I thought I wouldn’t be able to handle myself in the bush. I was confident I could pass the mandatory fitness test, which I did, by the skin of my teeth, but working on uneven terrain on steep slopes was another thing altogether.

There’s a range of more and less physically demanding jobs for a crew of 20 wildfire fighters, and up until then my ability and my ego always had me taking on the most difficult ones available. To switch to taking the least physical jobs possible was a mental shift I struggled with constantly. I always wanted to help out more than I was able and push myself as much as I could, but that would put myself and others at risk. I swallowed my pride and survived the summer by taking as many of the slower, safer jobs as I could and by doing this, I was ready to respond to the faster, higher risk jobs as they came up.

By the end of the fire season my body was desperate for some rest and rehab, but I had made it. Back home, with my classes online, I was able to spend more time on a full and complete rehab instead of what I needed to get through the day on the fire-line.

Up until now my progress has been remarkable and I am incredibly proud of how well I’ve been able to get myself back to where I want to be.

I’ve logged some cross-country ski kilometres, skated, and plan to get back ski-touring this winter.

While I’m not going to discount my commitment and perseverance that has gotten me here, I know it takes a lot more than the right attitude for a recovery like mine. So here goes the thank you list. First off, my years in speed skating gave me the physical strength and awareness, as well as the mental toughness to get through this kind of rehab. Speed skating also provided me both indirectly and directly with contacts like excellent physiotherapists, surgeons, and psychologists. My time in speed skating gave me so much to be thankful for and even well after my retirement, I’m still appreciative of all that it gave me. My fire crew that was accommodating and encouraging of me coming back – the motivation that provided was incredible. The Parks Canada rescue crew and helicopter pilot – badass heroes if there ever were ones. The three other guys I was with on the Rogers Pass trip – there’s nothing left to say. My family and friends for the meals, the hospital visits, phone calls and support. And my fiancée for everything, and everything else.