After a nine-month-long hiatus, 22-year-old Olympic triathlete Tyler Mislawchuk made his return to racing this weekend in Chengdu, China. Mislawchuk made his Olympic debut last August, returning home with a serious injury that put him out of training and competition for several months.

Finished up 6th in Chengdu @worldtriathlon. Rust has been Busted, Nice to be back racing.

“I love Olympic distance, but it is also great to have some sprints and this semifinal and final format, along with relays,” said Mislawchuk.

“It’s great for our sport to have different and new formats.”

Tyler finished third in a photo finish in his semifinal on Saturday morning alongside Austria’s Lukas Hollaus, and eventual bronze medallist Luke Willian of Australia.

In Sunday’s super-sprint final, Tyler looked to be a medal threat until just over 300m to go. Out-sprinted on the home stretch, Mislawchuk settled for sixth place in his first race since Rio. 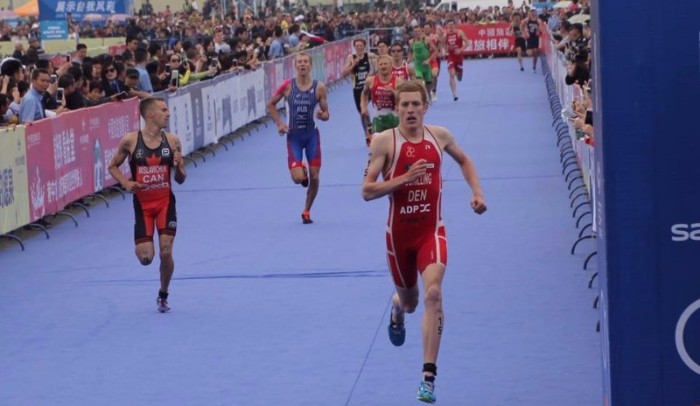 Rehabilitating his injury throughout the fall and winter with the help of the Pan Am Clinic Foundation and our team here at CSCM, Tyler is only just getting back into serious training. After spending four months unable to run post-Rio, Mislawchuk is happy to be back competing.

The Oak Bluff native ended a phenomenal 2016 season as the top ranked Canadian triathlete in the world, 15th overall. After joining coach Kyla Rollinson’s group earlier this year, Mislawchuk attended his first training camp of the season in February, and hopes to begin competing at Olympic distance races again in the coming months.

Honoured to host Olympian Tyler @Mislawchuk at the Running & Gait Centre helping him continue to achieve his goals pic.twitter.com/OTQZKu7nPa