Back to Press Releases
Published On: December 12, 2016

18-year-old Bison athlete Kelsey Wog has made a statement on the international swimming scene, and it’s no accident. Sunday, Kelsey won silver for Canada in the 200m breaststroke at the 2016 FINA World Swimming Championships (25m) in Windsor, ON. 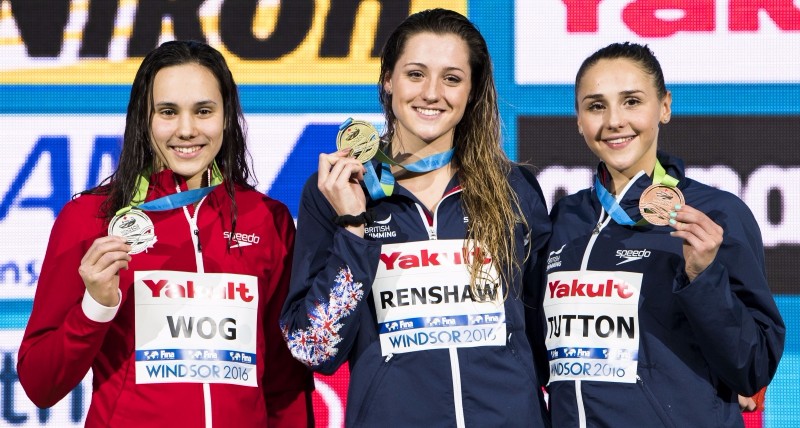 Kelsey flew to Windsor, ON. early last week to cheer on her teammates in the days leading up to Sunday’s 200m breaststroke event. To her surprise, her racing started much earlier than she’d anticipated.

The medley relay team set a new Canadian record in their heat, where Kelsey made it clear: she belonged with the best. In the evening’s final, the Canadian women finished fourth, just 0.2 seconds behind bronze medallists Denmark.

On Sunday came Wog’s best event, the 200m breaststroke. She was seeded tenth overall going in, and posted the third fastest time overall in her event (in addition to setting a new personal best of 2:20.26). Kelsey had qualified for the final as the underdog in a field made up almost entirely of Olympians and Olympic medallists. Her performance in the event final shocked her competitors, and the Canadian crowd went wild as Kelsey – sitting fourth for most of the race – overtook the second place finisher and raced side-by-side for gold against Great Britain’s Molly Renshaw in the final 25m.

While Kelsey shaved nearly two seconds off her heat time (posting a new PB of 2:18.52), she was a heartbreaking margin of 0.01 seconds away from winning gold. Kelsey’s silver medal, along with another silver and a gold for Canada, brought the nation’s best ever performance at a short course World Championships to a close.

Kelsey was as surprised as her competitors at her result, which was clear as she turned and saw her time after the finaI. An emotional Wog was interviewed after her race. “All I wanted was to make the final,” she said.

“It’s unreal, especially at home.” said Kelsey about her experience. “Racing at home made the whole team want to do that much better, [we wanted] to make everyone watching proud.”

According to Bison Head Coach and 1998 Olympian Vlastik Cerny, Kelsey’s success is no surprise to anyone who’s been paying attention. He knows that one of Canada’s best breaststrokers watched from her couch at home in August as Canada’s women’s team made history at the Rio Olympic Games.

“The fastest swimming in the world always looks easy and doesn’t look like anyone’s working hard. [Kelsey] has that same natural ability,” said Vlastik in an interview.

The bottom line? She’s good. Really good. And best of all, the young swimmer is nowhere near being done. Kelsey is still setting new personal best times at almost every meet she attends, and has room to get stronger, better, and faster in the years to come.

READ MORE from Kelsey in this Q&A >>