PyeongChang – One Year Out! (Skeleton)

Back to Press Releases
Published On: February 13, 2017 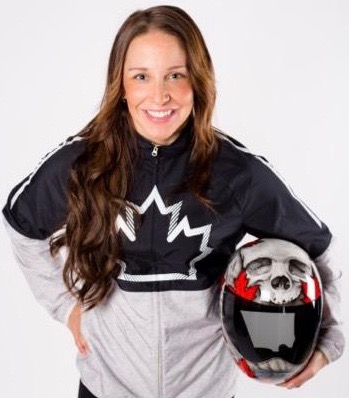 At the Vancouver 2010 Olympics, Manitoban Jon Montgomery captured gold in skeleton. Canadians remember his icon come-from behind win, and his maybe even more iconic celebration: Montgomery strolled through Whistler village, singing the national anthem with a pitcher of beer in hand and a wide grin on his face.

Montgomery’s gold-medal win came just one year after Brandon, Manitoba native Cassie Hawyrsh’s start in skeleton. Prior to skeleton, Cassie was a national level track athlete and volleyball player who had just graduated with a journalism degree. After her first run down the Calgary Olympic Park track in 2009, she fell in love with the sport of skeleton and hasn’t looked back. In her first season, Cassie made it clear she was a natural; and was named Rookie of the Year. Cassie broke onto the international scene in 2011, and made her World Championship debut in 2012.

The following season in 2013/2014, Cassie became the Canadian Champion. Rising quickly through the rankings and turning out consistent results on the World Cup circuit seemed to put Cassie in a good position to compete at the 2014 Sochi Olympics Games, but she was named alternate for the team and never made the trip to Russia. Cassie has spent the last four years training and competing with the goal of making her Olympic debut in PyeongChang.

DID YOU KNOW?
Cassie is a Fast and Female ambassador, as well as a writer and motivational speaker.